The use of bariatric surgery has increased greatly in the last decade, especially among women of reproductive age. Moreover, (unplanned) pregnancies are not uncommon in this group, due to an improved fertility (through weight loss) and a possible ineffectiveness of contraceptives (due to poor absorption in the intestine).

With the AURORA study, we aim to gather as much information as possible on contraception use, sexuality, quality of life, dietary habits, physical activity, etc. among women who have undergone obesity surgery. Women may join this study either before the bariatric surgery or after, as well as during a pregnancy. The number of times when measurements are taken will vary, depending on when a woman joins the study. Someone who wishes to participate before the surgery has taken place, will be interviewed at least 5 times. If she wants to be monitored further during her pregnancy, there will be 6 more measurement occasions . How do we work? We do not want to trouble anyone excessively with too many additional tests. This is why we only request some additional measurements during the usual consultations before and after bariatric surgery and before and after childbirth. After each consultation, we send a few additional questionnaires via e-mail. These can be completed at home at leisure. 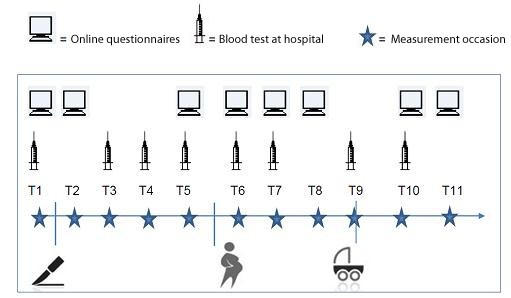